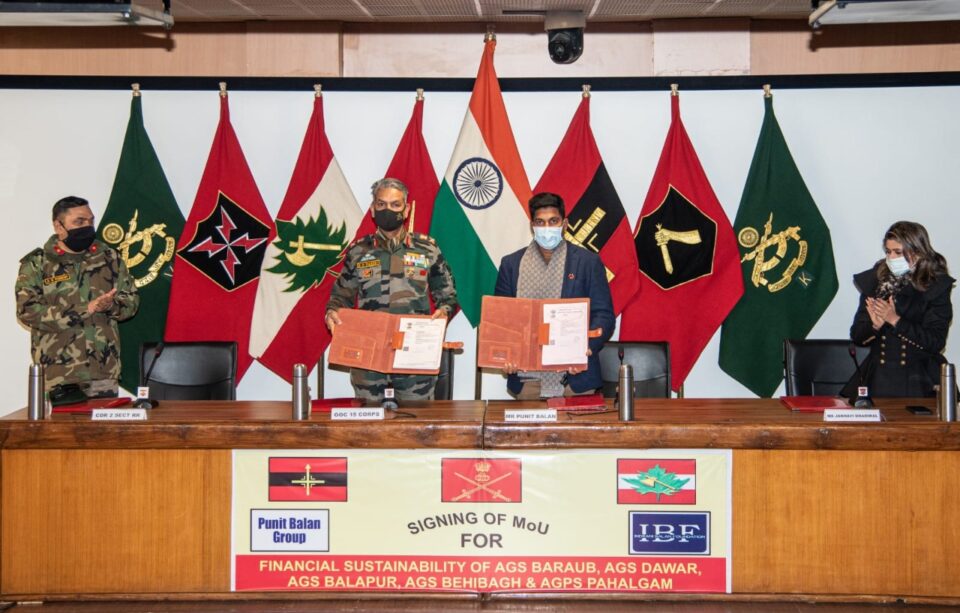 The event was presided over by Lt GenDP Pandey, GOC Chinar Corps along with Mr Punit Balan and Ms Jahanvi Dhariwal of Indrani Balan Foundation. Indrani Balan Foundation, a welfare foundation is active in variety of philanthropic work across India. The foundation under Mr Punit Balan has vast experience of social work in fields of education, health and sports, which will contribute immensely in improving quality of education as well as self-sustainability of these schools in future. Last year, Chinar Corps had signed a similar MoU with Indrani Balan Foundation for financial sustainability of five AGSs of Uri, Wayne, Trehgam & Hajinan in Baramulla & Kupwara Districts for five years. In addition, the Foundationhad built a new infrastructure for Pariwar School Society for Specially-abled children of Baramulla. This year, the MoU focuses on the four Army Goodwill Schools (AGSs) and Army Goodwill Public School (AGPS) and will entail financial support of Rs. 3,28,00,000 per year for the next five years. Chinar Corps currently runs 28 Army Goodwill Schools in Kashmir, which educates more than 10,000 students each year. Over one lac students have passed out from these esteemed institutions. This initiative of Indrani Balan Foundation will be a great example for other corporates to come forward and contribute in building prosperous Kashmir. On this occasion, GOC Chinar Corps expressed that this shared vision of future is the guiding force to rebuild a progressive Kashmir. He complimented Mr Punit Balan, President, Indrani Balan Foundation & Chief Managing Director, Punit Balan Group for his vision, foresight and initiative to invest in nation building as a social responsibility. He wished the Foundation a great success in their endeavours and assured extending all support from Chinar Corps to make the MoU a resounding success and an example for others to emulate. Post the signing of the MoU a short movie, Mauj Kasheer was screened. The movie has been conceptualized, written and directed by the young and dynamic Suhail Khan, where the cast and crew were all local Kashmiris. Suhail Khan is a freelance journalist and has rendered his services for bringing positive change in society. Through this cinematic work, he highlights the changing mindset of citizens, specially the women, who are against their wards joining the terrorist ranks. The mothers of Kashmir crave for their children to have a successful and safe future. The short movie is being uploaded on Youtube for public viewing.