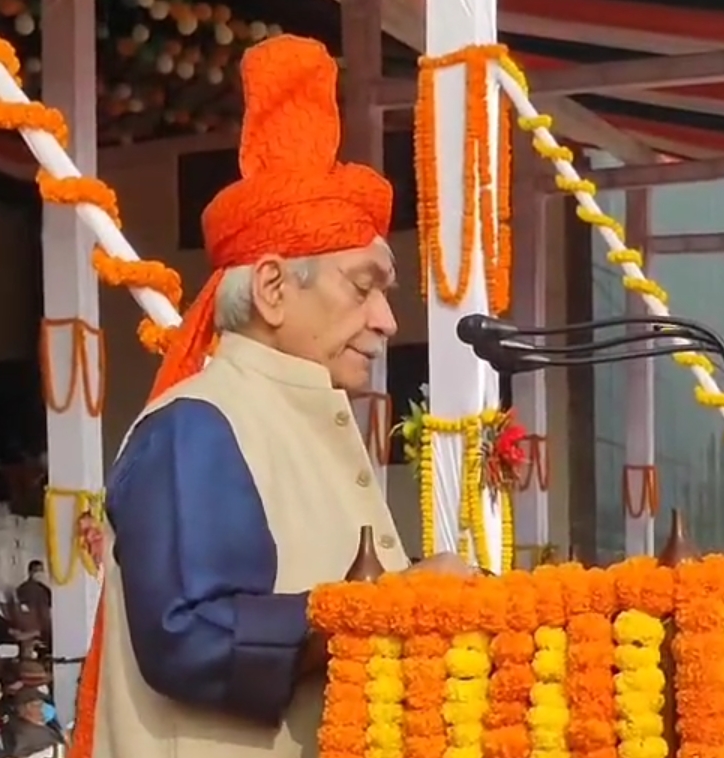 Srinagar, Jan 26 (KINS) Jammu and Kashmir Lieutenant Governor Manoj Sinha Wednesday said that the Union Territory was on the path of everlasting peace, progress and development but some people continue to instigate people as they weren’t happy with the J&K’s development.

Addressing 73rd Republic Day gathering at Moulana Azad Stadium in Jammu, the LG said that under the leadership of Prime Minister Narendra Modi, J&K was on a path of peace, progress and development. “All efforts are being made to take J&K to new heights and make the UT at par with any other State of India,” the LG said after unfurling the tri-colour.

Without naming anyone, he said some people were not happy with the pace of development in J&K and they continue to instigate people. “I urge the youth of J&K to join the process of development and shape their future accordingly,” he said.

The LG said that J&K is all set to get a major boost through industrial investment. “In February, we are expecting Rs 25000 Cr investment boost,” he said. He said that J&K government has ensured e-governance, corruption free governance, and transparent system. “No work is being carried out without proper tendering process,” he said.

The LG said that the UT achieved a milestone in Covid vaccination process and now the UT is proceeding to achieve its target for children above 15 years of age.

The LG said that J&K is all set to get a major boost through industrial investment. “In February, we are expecting Rs 25000 Cr investment boost,” he said. He said that J&K government has ensured e-governance, corruption free governance, and transparent system. “No work is being carried out without proper tendering process,” he said.

The LG said that the UT achieved a milestone in Covid vaccination process and now the UT is proceeding to achieve its target for children above 15 years of age.

He said I urge youth to be a part of this great journey of development of J&K, the beautiful land of peaceful coexistence, enlightenment, salvation and make invaluable contribution in enormous intellectual capital of the Union Territory., adding that The linking of 150 services with online public Feedback, besides linking EMPOWERMENT with similar system and DGGI reflects our resolve for Citizen Centric Governance and People First Policy.

Sinha said “We are committed to provide justice to citizens who were forced to leave their homes due to onset of terrorism in 90s. So far 7312 applications have been received through a Portal launched last year for addressing their grievances, out of which 4826 cases have been resolved.”

We cannot successfully meet the external challenge until every village on the border is prosperous. Considering this work as paramount, we have taken steps in the direction of fulfilling the aspirations of these areas which were ignored for decades said Sinha.”Transit accommodation for tribal families on 8 migratory routes and tribal community centers are being set up at 8 important places. The construction work of 29 Cluster Model Villages has also commenced, he added.”

“For the first time in history of J&K, tribal community was vested with forest rights last year. An integrated plan has been formulated for future generation of tribal community by ensuring their rights on the forest products. 100 smart schools are being built for tribal children,” Sinha said.

In his speech he further said between August and November 2021, about 52 lakh tourists visited Jammu and Kashmir. Keeping in view the Azadi ka Amrit Mahotsav celebrations of 75 years of independence, 75 off-beat tourist destinations are being developed in the Union Territory.” On this occasion, I express my heartfelt gratitude to all the doctors, nurses and healthcare workers who are engaged in selfless service to humanity. Today, Jammu and Kashmir has emerged as a model for the entire country in the management of the COVID-19 pandemic, he added.

“The work on the beautification of Tawi River Front on the lines of Sabarmati River Front will start from the first week of February. Tendering process has been completed and the work is expected to be over in two phases in one and a half year Republic Day. Three-tier Panchayati Raj system put in place has ensured people’s participation in socio-economic developmental efforts. New leadership at District, Block & Panchayats level is ensuring formulation and implementation of policies, keeping in mind the priorities of common people.”

“This year we are going to add capacity of 3,015 MVA to our Power Transmission System Likewise, in Power Distribution Sector, a capacity of 1286 MVA is being added this year to provide adequate electricity to entire UT. J&K is the first UT/State in the country to have District Good Governance Index for assessing the efficiency of public delivery system at district level. This index is expected to foster transparency and accountability in the basic unit of governance”

Lt Governor said “With the help of BEAMS Empowerment Portal, the common citizen of Jammu and Kashmir has access to monitor any project and expenditure being incurred in their respective area. Project delay which was earlier considered a norm is now a thing of the past. Against 9229 projects completed in 2018 at a cost of Rs. 67,000 crores, around 21,943 projects have been completed at a cost of Rs. 63,000 crore only last year,” he added. (KINS)

Praman.Ai, the World’s Largest Horticulture Exchange, is transforming the Apple trade in J&K