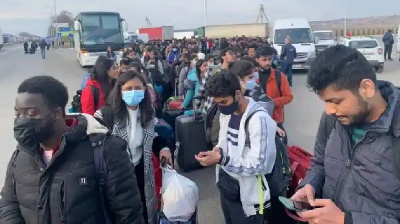 New Delhi, March 6  : President Vladimir Putin has warned that Ukrainian statehood is in jeopardy and has likened the West’s sanctions on Russia to ‘declaring war’ as the Russian invasion entered the 11th day on Sunday (March 6).

Amid thousands of people fleeing the war-torn country daily since Russia’s attack on February 24, the UN refugee agency has said that the number of Ukrainian refugees could rise to 1.5 million by the end of the weekend from a current 1.3 million.

Meanwhile, US President Joe Biden, in a call with Ukrainian President Volodymyr Zelenskiy, welcomed decisions by Visa and Mastercard to suspend their operations in Russia. Biden noted his administration is surging security, humanitarian, and economic assistance to Ukraine and is working closely with Congress to secure additional funding.

The development comes hours after Israeli Prime Minister Naftali Bennett met with Putin in the Kremlin to discuss the Ukraine crisis, then spoke with Zelenskiy by phone. Israel, home to a substantial population of Russian immigrants, has offered to mediate in the ongoing conflict.

COVID-19 recovery rate reaches over 53% in the country