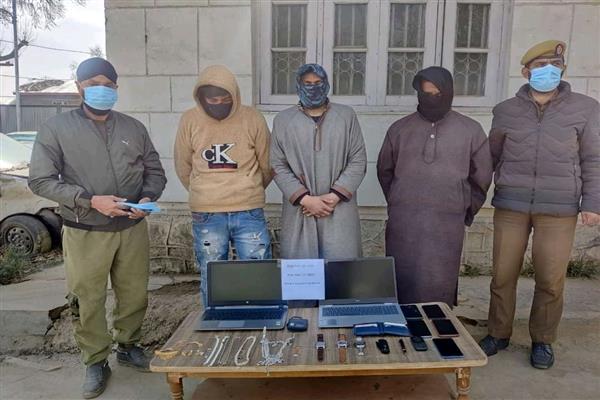 Srinagar , March 6 ( KINS) Jammu and Kashmir Police have solved a burglary case in Central Kashmir’s Budgam district and arrested two burglars on Sunday.
In a statement issued here, the police spokesman said, ” Police Station Budgam received a complaint stating therein that a burglary has occurred at Railway Quarters in the vicinity of Railway Station Budgam in which goods worth lakhs consisting of Laptops, Watches, cell phones and Gold Jewellery were stolen. Accordingly Case FIR number 58/2022 under relevant sections of law was registered at Police Station Budgam and a team was constituted to nab the burglars.”

” The entire stolen property worth lakhs was recovered from their possession. Also some stolen property in respect of earlier Case FIR number 22/2022 U/S 454,380 IPC dated 31/01/2022 has also been recovered from their possession. The investigation of the case is going on,” it reads.
It is pertinent to mention here that Budgam Police solved this burglary case in less than 48 hours and 100 percent recovery was made on the instance of the accused persons.
For the quick and timely response by Budgam Police, general public appreciated and hailed the efforts.( KINS)