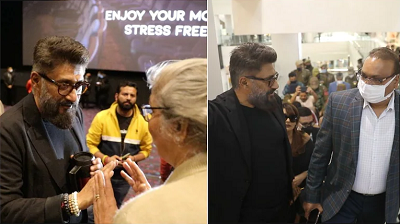 jAMMU , MARCH 6 ( KINS) The Kashmir Files is all set to release on March 11. Ahead of that, the makers of the film hosted a special screening of the exodus drama at Ground Zero in Jammu. Helmed by Vivek Agnihotri, The Kashmir Files is based on the lives of Kashmiri Pandits and is inspired by true events. It stars Anupam Kher and Mithun Chakraborty in the lead roles. The makers had invited influential personalities, politicians, Army Officers and known Kashmiri Pandits for the special screening of The Kashmir Files in Jammu.The film, which was earlier scheduled to release on January 26, 2022, in theatres, was pushed due to the rising Covid-19 cases. The special screening of the film, which was held in Jammu for the politicians, Army Officers and Kashmiri pandits, was met with a huge response, recognition and admiration. Post the screening, the makers interacted with every individual present there and took their feedback on the tragic story. The guests present there were moved by the narrative and plight of Kashmiri pandits after watching the film. They also praised Vivek Agnihotri’s vision and guts to make a film on such a challenging and unspoken subject.

Liquid explosives return to terror theatre in Jammu and Kashmir

Desist From Tinkering With Constitutional Provisions, Sajad Lone To Governor