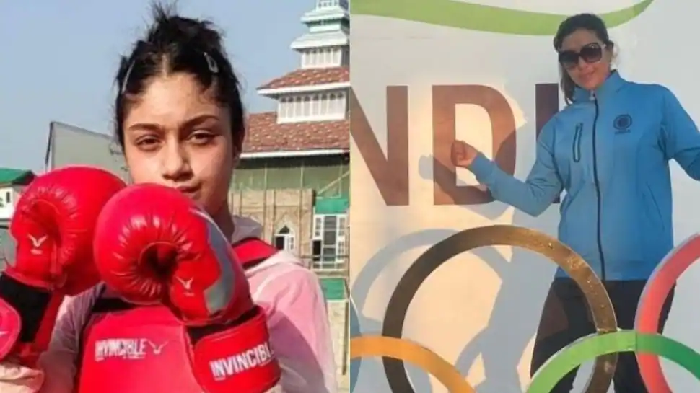 Srinagar, March 8 ( KINS) : Breaking all barriers, more and more Kashmir girls are now being seen on international and national sporting tournaments. From the Olympics to the Asian Games, Kashmiri women are making their presence felt in the sporting world. Before the 1990s, there were very female sportsperson from Kashmir who had made a name, globally. That’s changing now.

In the 1990s, Bilquis Mir, now an Olympian, started her sporting journey, fighting all odds. Hailing from the middle class, Bilquis has now made history in kayaking-canoeing. Not only did she bag medals in around six international and 16 national tournaments, but she also became the first Kashmiri woman to be chosen a judge in Olympian games and, the second time at the upcoming Asian Games in China. 33-year-old Bilquis Mir has also remained water sports coach of India for kayaking and canoeing game.A successful sportsperson, Bilquis has become the inspiration for thousands of Kashmiri girls and she is today happy with the fact that an increasing number of girls from the Valley are joining different sports.

Bilquis says, “It’s a positive message. When I started out, there were very few girls in sports but now, I see that changing. Girls should have more faith in themselves. They always face more hurdles in their careers, but my message would be that talent never dies. Keep working hard, where there is a will there is a way.” She adds, “I had a dream of becoming a judge at an international sporting event as I always saw very few women in decision-making teams at such events. I promised myself that I would be in the decision-making team of these events.”

Jammu & Kashmir Sports Council and Prime Minister Narendra Modi’s special attention to sporting activities, especially for girls, is also a big motivating factor. By providing world-class facilities in the valley, a sharp rise is seen in the female registrations in various sports.

Mushtaq Zargar, coach, Sports Council, agreed that women are doing better in sports now. “The sporting scenario for women is changing. Unlike a few years back, 50 per cent of those registered at sporting facilities are now girls. Girls are often faring better than boys. Wushu star Sadia Tariq won a gold medal; she is a golden girl for us. She is an inspiration for other girls in the Union Territory. I am sure we will have many more girls like Sadia in the future,” Zargar points out.

Sadia Tariq from Srinagar became the first Indian girl to get a Wushu World Gold Medal at the Moscow Wushu Stars event. At 15, Sadia is a two-time Junior National Wushu Championship gold medallist as well. Her success was hailed by everyone, including Prime Minister Narendra Modi who tweeted about her win.

NIA did not confiscate any incriminating thing from my residence: Mirwaiz