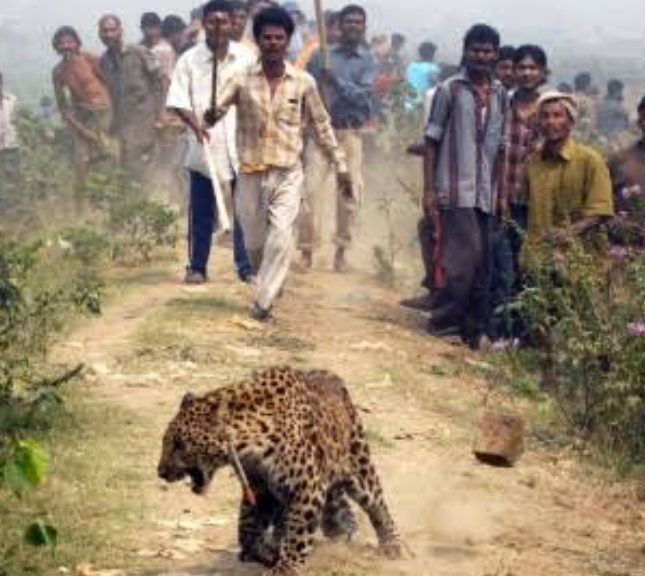 Srinagar March 17 (KINS): At least 40 people have been killed and over 430 injured by wild animals for the last five years across Kashmir.

Official data reveal that there is no end to man-animal conflict in the valley.

An official of the Wild Life Department said that mass urbanization, denudation of forests, encroachment of forestland, vanishing of buffer zones in the forests are some of the reasons responsible for conflicts between humans and animals.

“Animals do not feel safe in the forest so they are entering residential areas,” the official told news agency KINS.

“Leopards stray into residential areas usually in search of food. The human presence makes them insecure, following which they resort to attacking people,” the official said.

The wildlife department has made several sightings of wild animals in lower areas. Leopards have also been found close to human habitats in the recent past.

The snowfall in the wildlife habitats has also led to food scarcity, forcing the animals to forage for food in the low-lying areas, the official said.

When animals descend into lower areas, there are chances of their interaction with human inhabitants. This, at times, creates man-animal conflict.

Perturbed over the incidents of the man-animal conflicts, the Wild Life Department has asked people residing near forests to take extraordinary precautions.

In the advisory issued several times, the Department has asked people to avoid using bush growths and forest fringe areas for nature calls in late evening or night hours.

“Provide sufficient light around your utilities outside your home so that animals do not feel safe in the vicinity. The villagers must regularly remove all bushes or shrubs from the vicinity of houses in cooperative manner,” it adds.

“Do not chase or try to go near a wild animal if sighted from a distance. Provide sufficient light around your utilities outside home so that animals do not feel safe in the vicinity. Children and women are vulnerable to leopards. Bear attacks, which can be contained if they move in groups or children are accompanied by an elderly person,” the advisory reads. (KINS)

Was Sexually Abused When I was 14: Aamir Khan’s Daughter Ira