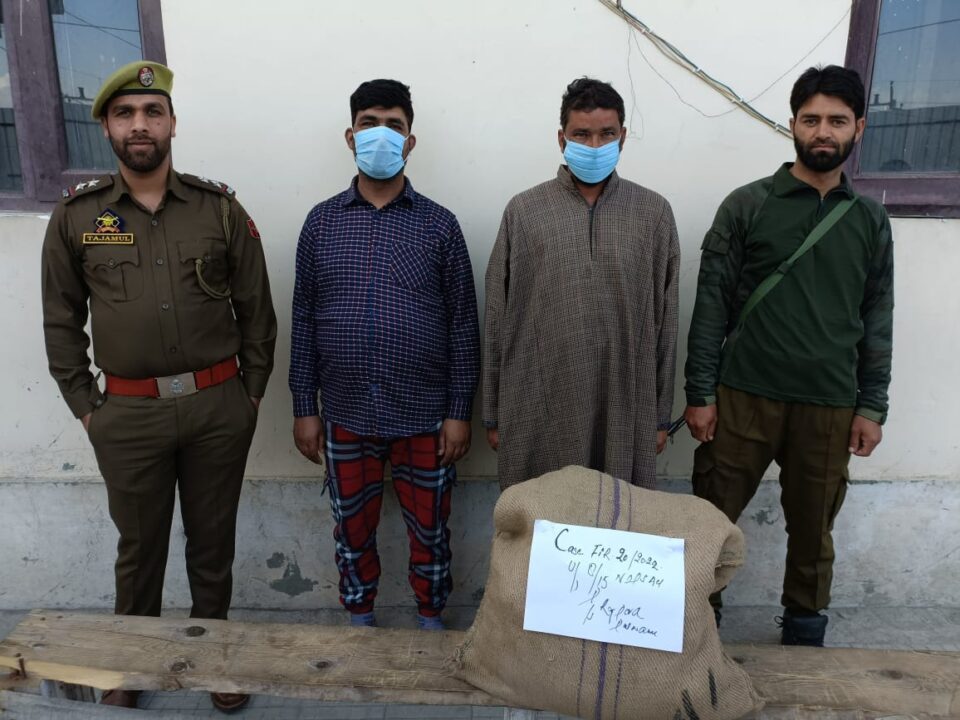 March 23: Continuing its efforts to eradicate the menace of drugs from the society, Police have arrested 07 drug peddlers in a series of actions across Kashmir valley. Besides, police recovered contraband substances from their possession.

In Kulgam, a police party of PS Kulgam at a checkpoint established at Chatabal Crossing intercepted a vehicle bearing registration number PB10GZ-3462. During checking, 02 gunny bags containing 17 Kgs of Poppy Straw like substance was recovered from the possession of Bidh Singh son of Balbir Singh resident of Ludhiana Punjab (Driver) and Manjeet Singh son of Nirmal Singh resident of Nawa Shahar Punjab.

Similarly, at another checkpoint established at Yamrach a police party of PS Behibagh intercepted a motorcycle bearing registration number JK05-7926 driven by Imtiyaz Ahmad Palla son of Abdul Ahad Palla resident of Reban, Shopian. During checking 16 Kgs of Poppy Straw like substance concealed in a gunny bag was recovered.

Meanwhile in Pulwama, on a tip off, a police party of PS Rajpora at a surprise checkpoint established at Checki Badri Nath Rajpora intercepted a vehicle bearing registration number JK01V-9211 with two persons on board. They have been identified as Javid Ahmad Matoo son of Wali Mohd Matoo & Nisar Ahmad Das son of Ahmadullah Das, both residents of Bijbehara, Anantnag. During checking, 06 kg of poppy straw was recovered from the vehicle.

Our consistent actions against drug peddlers should reassure the community members that we are making efforts to keep our society free from the scourge of drug menace.