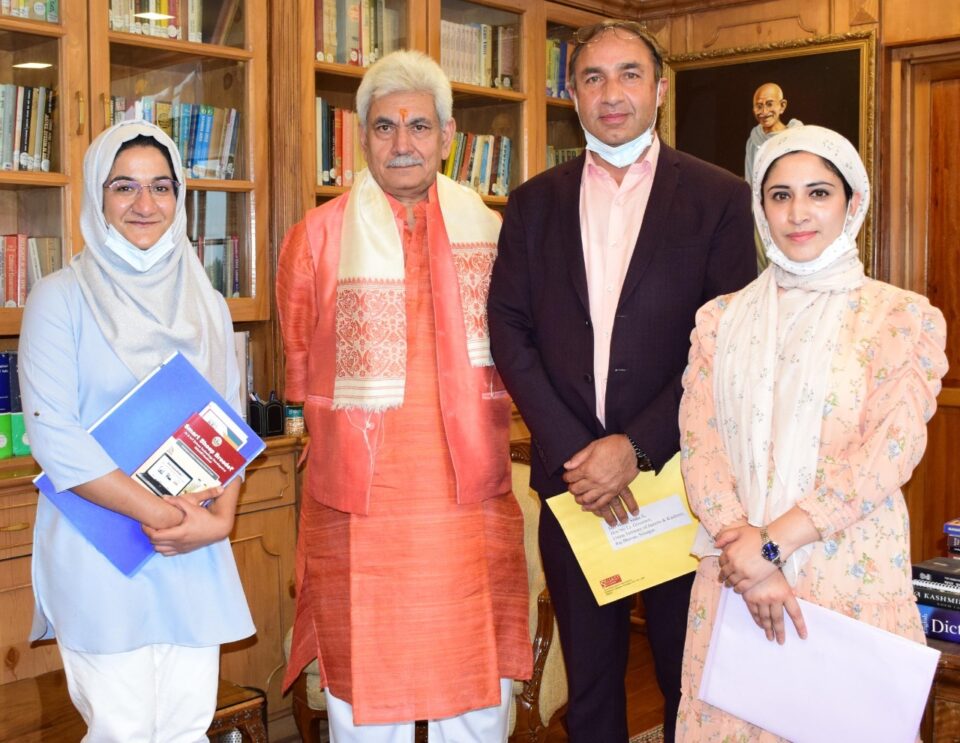 SRINAGAR, MAY 15: Lieutenant Governor Manoj Sinha today released a movie titled- “Nasha: It Kills” filmed by Aditya Tickoo, for MX Player OTT platform, here at Raj Bhavan.
The Lt Governor congratulated Filmmaker Aditya Tickoo and Producer Tarun Uppal for bringing out the movie on a relevant social issue.
The movie has been made with the theme of spreading awareness on the menace of drug abuse and its catastrophic effects on the individuals, families, communities and the society.
The Lt Governor hoped that the movie would create awareness in the society about the ill effects of drug abuse.
Appreciating the efforts of the young Filmmaker, the Lt Governor exhorted him to continue his endeavors of filmmaking and spreading social message in the society through movies.
Meanwhile, the Lt Governor also met two student innovators and national award winners of SKUAST Kashmir, accompanied by Dr Nazir A Ganai, Vice Chancellor, SKUAST Kashmir.
Ms Ambreen Hamadani, a PhD scholar, is the winner of many national awards, most prominent of which is the First prize in National Elocution Contest organized by Agricultural Science Congress at Banaras Hindu University, Varanasi. She is also the winner of India innovation Growth Program (IIGP) with a grant prize of Rs 11 lakh. She is a young student innovator and is building the student Start-Up “SmartSheepBreeder”, an IoT-based and AI-driven Decision Support System (DSS) for Sheep Breeders. Ms Munjib Maryam, another student is the winner of National Youth Parliament, recently held at New Delhi.
The Lt Governor praised the students for their achievements and wished them great success in their future endeavours. He impressed upon the students to develop technologies and work for the welfare of farmers.
The Lt Governor advised the Vice-chancellor to bring in modern technology in agriculture to make Jammu Kashmir the first Model Bio-economy region in the country.

Atal tunnel to be a major boon for people of Himachal, Ladakh, says Amit Shah

Despite orders, beggars continue to irk people in city

NIA raid on Jamaat leaders a self goal, Mehbooba