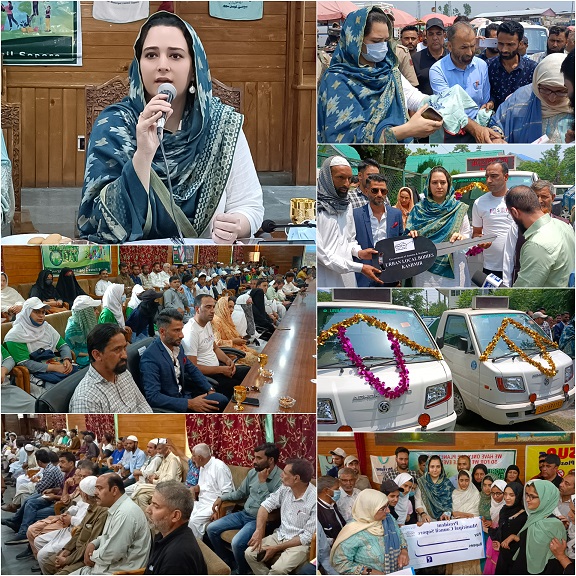 Initiatives being taken to eliminate Single Use Plastic: Dr Sehrish
BARAMULLA, JUNE 30: A month-long celebration to commemorate World Environment Day 2022 came to a close at Sopore here, today.
In this regard, Deputy Commissioner (DC) Baramulla, Dr. Syed Sehrish Asgar along with other dignitaries of the district today visited Sopore where she carried out several activities meant to disseminate awareness regarding the importance of protecting the environment.
On the occasion, the DC carried out an Anti-Polythene drive in main market Sopore during which cloth and paper bags were distributed against polythenes among the general public and were urged to adopt eco-friendly alternatives in their day to day life.
The DC also interacted with the local shopkeepers and asked them to play a vital role in order to eradicate the menace of polythene carry bags in the town.
Later, the DC presided over a Seminar Cum Awareness Camp in Dak Bungalow Sopore wherein PRIs, Civil Society Members, traders and students have shown their enthusiastic participation. The programme was organized by the Municipal Committee Sopore.
During the programme, President Municipal Committee Sopore through Power Point Presentation appraised DC regarding the profile of Sopore town depicting the culture and heritage of the area. President MC also presented the developmental scenario of the Sopore town.
In her address, the DC said that the most important objective of organizing the seminar was not only to create awareness on various environmental issues and highlight the steps that are being initiated to manage the natural resources in the district, but also to acknowledge and encourage proactive behavior among individuals towards the preservation and protection of the environment.
On the occasion, Tehsildars and Executive Officers were directed to identify more dumping sites in the area in order to ensure proper waste management.
During the programme, keys of two hoppers were handed over to Municipal Committee Sopore to cater the scarcity while managing waste in the area.
While complementing Municipal Committee Sopore for organizing such a mega seminar, the DC sought an active cooperation of all the stakeholders to play a proactive role in keeping the environment clean and making people aware in this regard.
Meanwhile, students presented skits on the occasion, through which awareness was spread among the participants regarding the environment protection, and the same was quite applauded by the participants.
Moreover, a felicitation programme was also held during which students were felicitated with certificates and award money.

Home isolation for Covid-19 patients with mild symptoms a way ahead: DAK

Another Batch Of 457 Hajj Pilgrims Leaves For Saudi Arabia