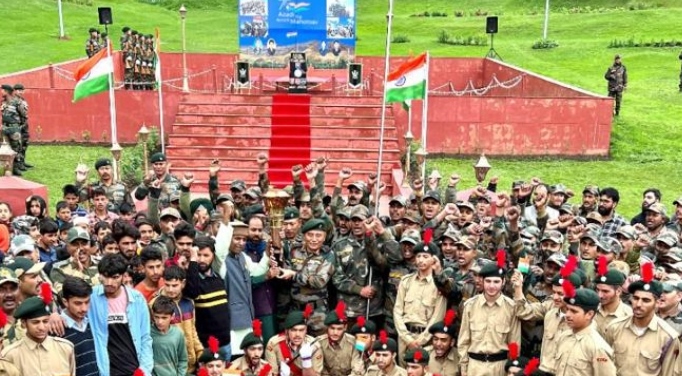 The ceremonial event to commemorate Kargil Victory Flame was organised at High Mast Tricolour Flag loc on the morning of 14 July. As part of the event, a Victory March was organised from entry point of Gulmarg to the event location, wherein serving soldiers, CAPF personnels, Veterans, NCC Cadets of AGS Ziran, Students of Butapathri, and citizens including visiting tourists participated in huge numbers with patriotic fervour. The Flame exchanged hands during the victory march to showcase the unity in victory.A display was organised on the occasion in form of a spirited Khukuri Dance performance, Pipe Band Performance and Jazz Performance by troops ex Gulmarg Battalion. This event witnessed a wholehearted participation by everyone and proved an absolute tribute and recognition for the unparalleled sacrifice and indomitable spirit of war heroes of Kargil War, who laid their lives while maintaining the sanctity of the borders of our Nation.