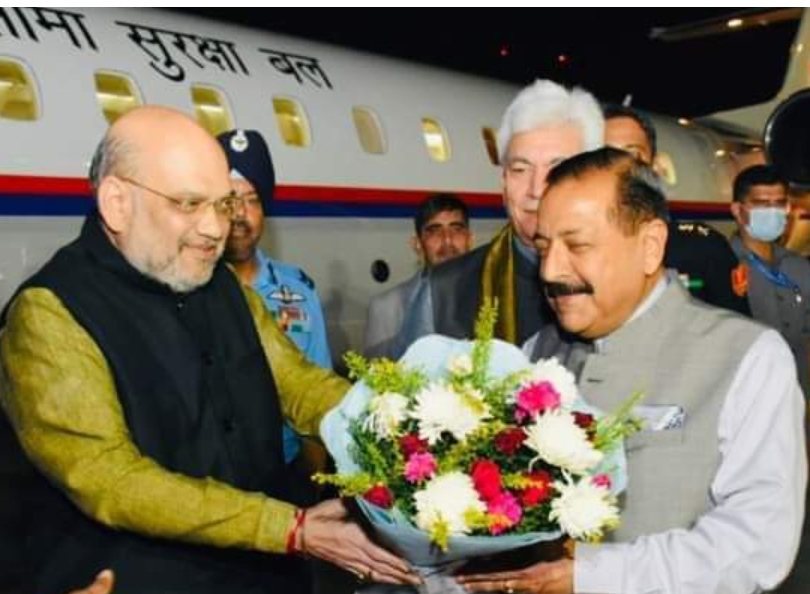 Jammu, Oct 4 (KINS) Union Home Minister Amit Shah is scheduled to address a historic public rally in J&K’s Rajouri town on Tuesday where he is expected to announce ST reservation for the Pahari community.

Over enthusiastic members of the Pahari community from different parts of Rajouri and the neighbouring Poonch district have started reaching Rajouri town where high security is being maintained in and around the venue at the town’s bus stand.

In the evening on Monday, Shah met delegations of Paharis, Gujjars/Bakarwals, Dogras and Sikhs at the Raj Bhavan where he spent the night.

He reached Jammu around 8 p.m. Monday.

On reaching Jammu, Shah tweeted, “Reached Jammu and Kashmir on a three-day tour. Through the medium of different programmes, I’m eager to have dialogue with the people of J&K”.

In another comment he said, “Prime Minister Narendra Modi declared Government holiday on the birthday of Maharaja Hari Singh keeping in view his role in making Jammu and Kashmir an integral part of the country”.

Before flying to Rajouri, the Union home minister will pay obeisance at the Mata Vaishno Devi shrine in Reasi district.

He will also lay the foundation stone of 41 Water Supply Schemes under Jal Jeevan Mission.

Shah will have a meeting with the senior BJP leaders at 3.30 p.m. today at Jammu Convention Centre.

At the same venue, he will launch developmental projects at 4.30 p.m.

The BJP leaders are expected to brief Shah about the likely impact the grant of ST status to Paharis will have on the electoral prospects of the party.

It is believed that the grant of ST status to Paharis can affect the electoral results in around a dozen Assembly constituencies, including Poonch, Mendhar, Surankote, Kalakote, Nowshera, Rajouri, Thanna Mandi, Budhal and Sunderbani in Jammu division and Uri, Karnah, Gurez and Trehgam in Kashmir division.

Besides, the Paharis have sizeable population in Pahalgam, Shopian, Kupwara, Lolab and Baramulla Assembly constituencies of Kashmir division.

He will leave for Srinagar around 6 p.m. today where he has an equally busy schedule.(Agency IANS)

In the initial investigation into the incident of death of DG Prisons HK Lohia, it has come to fore that one domestic helper Yasir Ahmead resident of Ramban is the main accused.